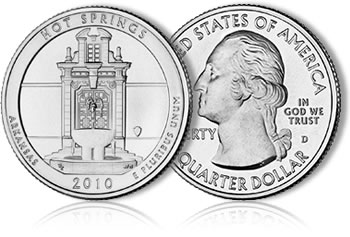 The quarter is the first of five for 2010, and the inaugural coin in the U.S. Mint America the Beautiful Quarters™ Program — a series that over 11 years will celebrate 48 National Parks, two U.S. Fish and Wildlife sites, and six U.S. Forest Service sites.

The Arkansas Hot Springs National Park quarter features a reverse design, by Don Everhart, depicting the park’s headquarters building in the background and its historic fountain in the foreground. The National Park Service (NPS) emblem is featured to the right of the headquarter’s door. The design was sculpted by Joseph Menna.

The obverse (heads side) of the quarter remains the same with its depiction of George Washington — based on John Flanagan’s 1932 portrait.

NPS officials will join U.S. Mint Director Ed Moy at the quarter release ceremony to honor Hot Springs National Park on its 178th anniversary. The event will last less than an hour and will be held at the front of Administration Building.

A coin exchange will immediately follow for anyone interested in swapping cash for $10 rolls of the new quarters with a $100 limit in place.

For those who can not attend the ceremony and do not want to wait for the coins to appear at local banks and in daily change, there is also the opportunity to buy quarter rolls and bags directly from the Mint beginning on the day prior to the ceremony, April 19, at noon Eastern Time.

100-coin bags will also be for sale, listed at $35.95 for quarters struck from either Philadelphia or Denver.

Finally, the Mint also announced that there will be a coin forum on the evening prior (the 19th) to the ceremonial release. The forum, hosted by Director Moy, offers the opportunity for coin collectors and enthusiasts to ask any coinage questions and learn about other new coins set for release in America.

The forum will begin at 5 p.m. Central Time and will be held at the:

Hot Springs was first established as a federally controlled location on April 20, 1832, making it the oldest national site and earning it the right as the first to be celebrated in the new quarter series. It is actually the 18th national park, in terms of order. That happened on March 4, 1921, which was the same time it was renamed from Hot Springs Reservation to Hot Springs National Park.

It was only in late March when the Mint first revealed the final five 2010 park quarter designs.