Originally planned for outside of the Old Faithful Inn, the function was move indoors to the Old Faithful Lodge Recreation Hall due to the inclement weather in the region — rain and drizzle were common and were joined by temperatures only in the 45-degree range.

Perhaps not as picturesque of backdrop as the famous Old Faithful Geyser found just steps outside, the crowd did not seem to mind the more comfortable surroundings as the official ceremony was launched under the direction of Master of Ceremonies Park Public Affairs Officer Al Nash.

Initiating the function was the traditional national anthem "The Star-Spangled Banner" before Gene Bryan, Wyoming Tourism Board Member, took to the stand to praise the state of Wyoming, the Park Service and the U.S. Mint for the creation of the Yellowstone National Park Quarter.

Following Bryan, Paul Schullery, historian and author, was called to make a few comments before Superintendent of Yellowstone National Park Suzanne Lewis was introduced. Lewis also commented favorably on the America the Beautiful Quarters™ Program along with remembering a bit of the previous 50-State Quarters Program which serves as the template for the new series.

Finally, US Mint Director Ed Moy stood up to the podium and gave a short speech which included a bit of fond memories from his childhood.

"Well, the last time I was here at Yellowstone National Park my parents were young, I was very small and so everything in this park looked huge and magical to me," recalled Moy. "Things change. My parents are much older, I’m not so small anymore but some things stay the same. And that is that this park is still magical."

Moy went on to talk about the first quarter release ceremony of the America the Beautiful Program held at Hot Springs National Park in Arkansas in April, but quickly switched gears back to Yellowstone.

"As I was coming here Old Faithful was erupting and for me, whose been to many coin launches, that gives a whole new meaning to a coin launch. So thank you Old Faithful!" joked Moy.

Details of the America the Beautiful Quarters Program were then discussed by Moy including the legislation behind the series and the design work that goes into it. Before closing, Moy tied the quarter program back to the sites they honor and specifically Yellowstone itself:

"When Americans pull this coin out of their pockets, some will remember fond memories of their family vacation in Yellowstone, others will be inspired to visit Yellowstone to create new memories," commented Moy. "Many Americans will make the connection to their rich history as a Nation and the extraordinary natural resources of Wyoming."

With the close of the ceremony, children aged eighteen and under were given a new Yellowstone National Park Quarter for free just for attending. Adults were allowed to line-up to exchange cash for rolls of the new strikes, just as has been done at other recent coin ceremonies.

Of course, today was not the first day in which the Yellowstone Quarters were obtainable by the public. The Federal Reserve has had them available for distribution since Tuesday, June 1. That same day, the Mint started offering two-roll sets and 100-coin bags of circulation quality Yellowstone Quarters on its website and via the toll-free number of 1-800-USA-Mint.

The new quarter reverse, designed and sculpted by Don Everhart, features Old Faithful with a mature bull bison in the foreground and another toward the geyser. Inscriptions included are YELLOWSTONE, WYOMING, 2010 and E PLURIBUS UNUM." 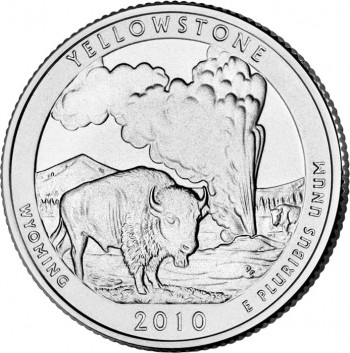 This summer the US Mint will also introduce the America the Beautiful Silver Bullion Coins. These are duplicates of the quarters, but weigh five ounces, have a diameter of 3 inches, and are composed of .999 fine silver.