The 2011 Gettysburg National Military Park Quarter is scheduled to be released into circulation on January 24, 2011, with an official launch ceremony to be held the following day by the US Mint. This sixth strike of the Mint’s America the Beautiful Quarters® Program honors the military park located in the state of Pennsylvania created to commemorate the American Civil War Battle of Gettysburg. 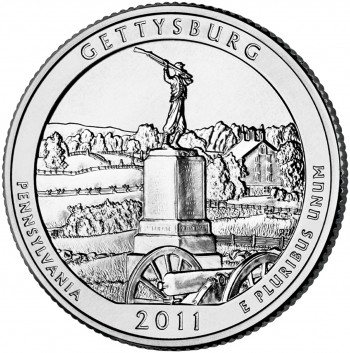 U.S. Treasury Secretary Timothy Geithner chose the design for the reverse of the Gettysburg National Military Park Quarter, shown to the left, with his selection announced by the US Mint on December 1, 2010. The design depicts the 72nd Pennsylvania Infantry Monument found on the battle line of the Union Army at Cemetery Ridge. Inscriptions included in the design are GETTYSBURG, PENNSYLVANIA, E PLURIBUS UNUM and 2011. This reverse was designed by United States Mint Artistic Infusion Program (AIP) Master Designer Joel Iskowitz and sculpted by United States Mint Sculptor-Engraver Phebe Hemphill.

Prior to the Treasury Secretary’s decision, the US Mint submitted four design candidates (shown below) for the Gettysburg coin to two different panels chosen to review potential designs for upcoming American coins including these America the Beautiful Quarters. These two bodies are the Citizen’s Coinage Advisory Committee (CCAC) and the United States Commission of Fine Arts (CFA).

The CCAC did recommend Design Candidate PA-01 (which was eventually chosen by the Treasury Secretary) for the Gettysburg National Military Park Quarter at their January 26, 2010 meeting, but did so reluctantly. In fact, the committee voted 7-2 to encourage the US Mint to solicit additional designs that would be more symbolic in nature to better represent the importance of the Battle of Gettysburg to the country.

The CFA recommended an alternative image when it selected Design Candidate PA-03 showing the Soldiers National Monument to be used on the Gettysburg Quarter at its January 21, 2010 meeting. In their recommendation, the CFA added that PA-03 was the "simplest design and will therefore be the most legible at the scale of the coin."

Gettysburg National Military Park was created by an act of Congress signed into law by President Grover Cleveland on February 11, 1895. The law directed the War Department to establish the park as a means to commemorate the importance of the American Civil War Battle of Gettysburg and those who fought in it.

To accomplish this task, the War Department accepted a deed conveying the ownership of 800 initial acres for the park from the Gettysburg Battlefield Memorial Association. This association was created shortly after the actual battle some thirty years earlier to mark “the great deeds of valor … and the signal events which render these battlegrounds illustrious."

The Battle of Gettysburg is seen as one of the most important in the American Civil War as many believe it to be the turning point for the struggle between the United States of America and the Confederate States of America. Prior to this battle, the Confederate forces of the Southern states were routinely defeating forces from the North. However, following the Battle of Gettysburg, the Union Army of the North would proceed to obtain many more victories eventually resulting in the surrender of the Confederate Army.

However, to achieve this victory, thousands would lose their lives including over 7,800 at the Battle of Gettysburg alone. Adding in another 27,000 wounded, and the battle would go down in history as the bloodiest in the Civil War.

History would also be linked to the battlefield owing to a speech given here a few months following the conflict by President Abraham Lincoln. Known as the Gettysburg Address, the speech is perhaps one of the most famous in the history of man and began " Four score and seven years ago our fathers brought forth on this continent a new nation, conceived in liberty, and dedicated to the proposition that all men are created equal."

Today, the military park receives over two million annual visitors and is administered by the National Park Service which assumed the role in 1933.