The fifth coin released under the America the Beautiful Quarters Program is also the first not to depict a national park. The 2010 Mount Hood National Forest Quarter from Oregon is instead emblematic of the national forest area which was first set aside by the government in 1892. 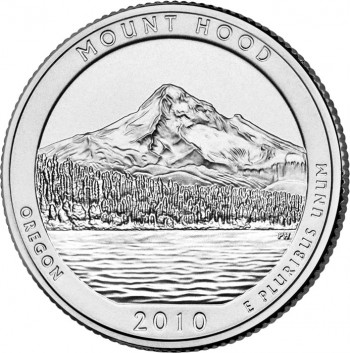 The reverse design featured on the quarter was revealed by the United States Mint on March 24, 2010, after it was selected by Treasury Secretary Timothy Geithner. It was both designed and sculpted by Phebe Hemphill, and depicts a view of Mt. Hood in the background with Lost Lake in the foreground.

Prior to its selection, four design candidates (shown below) were created by the U.S. Mint and offered up for review. The two major entities charged with reviewing and recommending American coins and medal designs, the Citizens Coinage Advisory Committee and the United States Commission of Fine Arts, each chose the same candidate, which is represented below as OR-03. It was this candidate proposal that was the basis for the final Mount Hood National Park Quarter design shown above.

Mt. Hood was named after a respected admiral of the the British Navy, Lord Samuel Hood. This name was given in 1792, but the area remained virtually untouched for the next 100 years.

Conscious of its immense beauty and pristine environment, the area was put under the protection of the federal government in 1892 as part of the Bull Run Forest Reserve. In 1924, it was renamed Mount Hood National Forest.

Located only 20 miles east of Portland, Oregon, Mount Hood consists of more than 1 million acres of mountains, streams, lakes and forests. As such, more than 4 million annual visitors enjoy the multiple features that the Forest has to offer such as hunting, fishing, skiing and camping among many others.

Over 25% of the land has been designated as wilderness, which directs the Forest Service to restrain human influences on the habitat of that area.