The 2011 Olympic National Park Quarter is scheduled to be released into circulation on June 13, 2011 and marks the third of five strikes to be issued in 2011 from the US Mint’s America the Beautiful Quarters® Program. This coin honors Olympic National Park of Washington with a design showcased on its reverse. An official release ceremony for the coin will be held by the Mint shortly before or after the coin enters circulation. 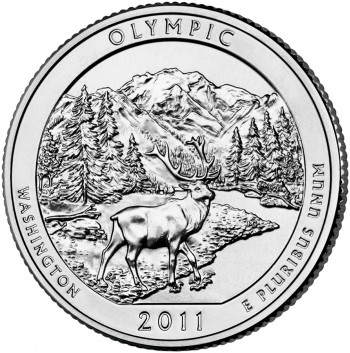 Secretary of the Treasury Timothy Geithner chose the final design to be featured on the Olympic National Park Quarter from four design candidates submitted to him by the US Mint. The chosen design shows one of the park’s most iconic creatures, a Roosevelt Elk, standing on a gravel bar of the Hoh River. Off in the distance, Mount Olympus is depicted. Surrounding the design are the inscriptions of OLYMPIC, WASHINGTON, E PLURIBUS UNUM and 2011. The reverse was designed by AIP Master Designer Susan Gamble and sculpted by United States Mint Sculptor-Engraver Michael Gaudioso.

Secretary of the Treasury Geithner based his choice on the recommendation of US Mint Directory Ed Moy as well as comments received by the Citizen’s Coinage Advisory Committee (CCAC) and the United States Commission of Fine Arts (CFA). Both of these groups are asked for their input on possible designs for coinage of the US Mint.

The CCAC met on January 26, 2010 to review these four design candidates for the Olympic National Park Quarter as well as design candidates for the other 2011 strikes of the America the Beautiful Quarters Program. Their chosen design was WA-01, which was also the final design selected for the coin. In their comments, they added that the "Committee found the combination of the park’s wildlife and scenery to be especially compelling."

When the CFA reviewed the design candidates for the Olympic National Park Quarter at their January 21, 2010 meeting, they also selected WA-01 as their first choice by "supporting the inclusion of an animal as an emblem of the larger landscape and commenting favorably on the depiction of the Roosevelt elk."

Olympic National Park is found on the Olympic Peninsula in the state of Washington and is composed of over 900,000 acres. That location on the peninsula, separated from the mainland by the Olympic Mountains, has resulted in the park’s ecosystem being mostly endemic and thus providing a true glance into the past of the region.

The park itself is composed of three very different regions. Among these is a Pacific coastline which stretches for 73 miles and consists of patches of beach and wilderness. Some of the beaches are sand while others are filled with rocks and boulders making hiking the coastline extremely difficult.

Also found within the park are the Olympic Mountains. This glaciated mountain range is dominated on the western half by Mount Olympus which rises up 7,695 feet and receives a large amount of snow. The eastern edge is much dryer and is topped by Mount Deception at 7,788 feet.

Finally, the park has a temperate rainforest which receives an average of 150 inches of rainfall a year. That moisture qualifies the forest as the wettest area in the continental United States. Common trees within the forest are Sitka Spruce, Western Hemlock and Coast Douglas-fir, with approximately 366,000 acres considered old-growth.

Creatures within the park are also abundant. Among them are the iconic Roosevelt Elk as well as the Olympic Marmot which is known to only exist within the park’s boundaries.

Today, an estimated 2.7 million annual visitors come to the park to enjoy the resources it has to offer.