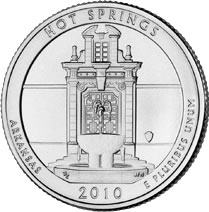 Quarter production was off to a late start this year as the Hot Springs National Park Quarter did not begin to enter circulation until April 19, 2010. In a typical year, new quarter-dollars are already pressed and distributed in January.

Why the delay? The legislation calling for the new quarter series did not become law until late December 2008. The US Mint usually prefers around 18 months of lead time for new coin designs. It did not have that. In less than a year it had to create the foundation for the new America the Beautiful Quarters™ Program, help manage the selection of 56 different national parks and sites to be honored on the coins, and spearhead the creation of this year’s five designs.

The very first 2010 Hot Springs quarter mintages appeared in March. 42.4 million were struck during the month, with 19 million from Denver and 23.4 million from Philadelphia. Denver and Philadelphia host the two facilities responsible for producing daily change, which is why circulating quarters feature either a "P" or "D" mint mark.

Another 35 million quarters were produced in April — 16.4 million from Denver and 18.6 million from Philadelphia.

Since the Mint has yet to break numbers out by quarter design, it is assumed that Hot Springs’ mintages are not finalized and that they will include all of March, April and a portion of May’s production totals. The next 25-cent piece in the series, the Yellowstone National Park Quarter, will be released into circulation on June 1, 2010. The Mint will be busy with those this month.

By early June, final mintage levels for the Hot Springs National Park Quarter should be available. Yellowstone figures are not expected until at least July.