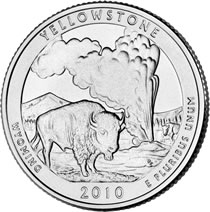 The United States Mint this week published the production figures for the recently released Yellowstone National Park Quarter. The coin marks the second issue of the debuting America the Beautiful Quarters™ Program.

While the Mint is quick to point out that the numbers are “preliminary production figures only,” with the official mintages not expected until January 2011, they still provide a tangible reference to compare with previous quarter-dollars.

Released earlier this year as the premier strike of the America the Beautiful Quarters series was the Hot Springs National Park Quarter. The Mint shows only 59.6 million of those coins were manufactured, with 29 million from Denver and 30.6 million from Philadelphia. (Read the ParkQuarters.com article here regarding their mintages.) That number earned the Hot Springs Quarter the distinction of having the lowest mintage of any circulating 25-cent piece since 1955, replacing the 2009 Northern Mariana Islands Quarter which had previously held the title. (The Northern Mariana Islands Quarter is listed at a total of 72.8 million.)

The Yellowstone Quarters have an added 8.8 million strikes over the Hot Springs coins, making them more plentiful for daily transactions and perhaps beginning a new trend of higher mintages for the series in general. Of course, for that to occur and continue, American economic conditions need to improve as well.

The Mint strikes circulation quality coins based on the needs for daily commerce. During economic downturns there are generally fewer transactions which cuts into that demand. Additionally, American use their older coins that were once hoarded at home, essentially re-supplying coinage demand from the bottom up, which seriously reduces the necessity of newer minted coins.

Collectors, however, are happy to see low mintages, as one of the market factors in determining a coin’s worth is how many are available — the more scarce, the more valuable. A valid indicator of this collector interest is the number of quarter bags and rolls sold by the US Mint directly to the public. As the Mint charges a premium on these coins, usually those who purchase them do so for one of two reasons — to add them to their own collection or to re-sell them for a profit.

The most recent sales figures for these America the Beautiful Quarters products are shown below:

The "as of date" for the above US Mint provided figures is Sunday, July 4, 2010. The Hot Springs products launched on April 21, 2010, giving it several weeks lead time since the Yellowstone products were released on June 1, 2010.

The next Yosemite National Park Quarter will be released into circulation on July 26, 2010. The Mint has already started minting them in preparation.