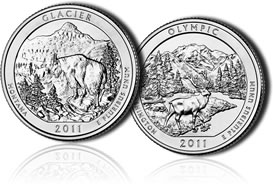 These two quarter are but two of the five scheduled to be released by the US Mint this year under the program which debuted just last year. The series features reverse designs emblematic of selected sites of national interest from around the United States and its territories. Coins in the program are scheduled for release at a rate of five per year until completed in 2021.

The launch ceremony for the first 2011 America the Beautiful coin was already held on January 25, 2011 and saw the debut of the Gettysburg National Military Park Quarter. The format used at that ceremony will be used again for the upcoming two official functions which will include local entertainment, historical background and, of course, a few short speeches by noted individuals in attendance. Following the ceremony, adults will be offered the chance to exchange cash for rolls of the new strikes while children aged 18 and under who attended will be given a free new quarter dollar to commemorate the event.

Also hosted by the US Mint will be coin forums held the night before the scheduled release ceremony. These forums allow the public the opportunity to express their opinion about American coinage and also allows the Mint to inform the public about possible new coins and programs yet to appear.

The official launch ceremony for the Glacier National Park Quarter has been slated for Wednesday, April 13, 2011 at 1 P.M. (Mountain Time) at Columbia Falls High School located at 610 13th Street West in Columbia Falls, Montana. The coin forum is scheduled for the previous night at 5 P.M. and will be held at the Glacier National Park Community Building at park headquarters in West Glacier, Montana.

For the release ceremony celebrating the Olympic National Park Quarter, the US Mint has indicated a date of Tuesday, June 14 at 11 A.M. (Pacific Time), at City Pier in Port Angeles, Washington. The coin forum will be held on the evening of the 13th at 7 P.M. at the Olympic National Park Visitor Center located at 600 East Park Avenue in Port Angeles, Washington.

It should be noted that these functions are ceremonial in nature, and do not necessarily indicate when the coins will be available to the public. For instance, the ceremony for the Glacier Quarter is to be held on April 13th, the same date in which the Mint indicates it will begin selling bags and rolls of the quarters. However, the Federal Reserve Bank Services indicates the coins will actually launch into circulation on April 4, 2011.

As for the Olympic Quarter, the ceremony on June 14th comes a day after the US Mint schedule shows it will begin selling bags and rolls of the coins. The 13th is also listed by the Federal Reserve as the first day in which the coins will be offered in circulation.

Two more America the Beautiful Quarters will debut later this year. The Vicksburg National Military Park Quarter is scheduled to be released into circulation on August 29, 2011 and the Chickasaw National Recreation Area Quarter on November 14, 2011. Their launch ceremonies will be announced once they are established, according to the US Mint.