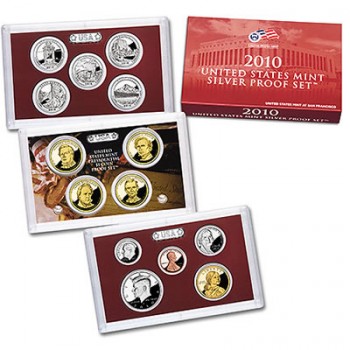 Last year’s silver proof sets are still listed in the Mint’s online store, but a statement in red font by each of the products says ‘This product is temporarily unavailable‘. No further information is provided.

However, the last time such a statement was affixed to one of the sets in March it was to adjust its pricing after silver had reached over $35 an ounce.

The US Mint hiked prices for the 2010 Quarters Silver Proof Set and the 2010 Silver Proof Set in March by $7 and $8 when an increase in silver prices lifted the sets’ melt values to levels approaching their original price.

The latest sales stoppage for these same two sets is likely for the identical reasons, as silver burst over the $40 an ounce level on Friday and to a fresh high not seen since 1980 when the Hunt brothers attempted to corner the silver market.

The 2010 Quarters Silver Proof Set and 2010 Silver Proof Set have coins composed of the precious metal that combine to respective silver weights of 0.904 and 1.34 ounces. At silver’s closing price in New York on Friday at $40.64 an ounce, each of the sets have respective melt values of $36.72 and $54.35. The updated set prices from March were $39.95 and $64.95. Expect those to go higher when the proof sets are once again available.

A good guesstimate of how much prices could rise, provided silver does not fly higher, would be $41.95 and $67.95. These are the prices the United States Mint is currently charging for the 2011-dated proof sets which contain the same amount of silver.