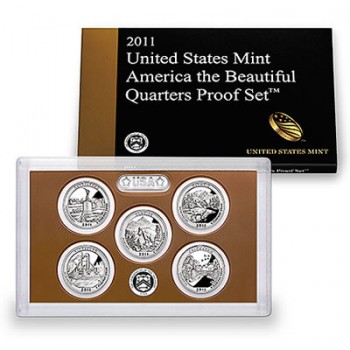 The 2011 Quarters Proof Set sales debut was 53,944, although that was lower than last year’s issue which totaled 75,558 over the same amount of days. The debuting sales totals cover a period of time between their release on a Thursday to the following Sunday. In the case of the 2011 America the Beautiful Quarters Proof Set, it was released on March 17, 2011. The 2010-dated set launched on May 13, 2010.

A factor in the different opening sales levels between the years is likely, in part, due to the differences in their release dates and those of the core annual Proof Sets, another product from the US Mint that includes 14 coins. This core product offers identical proofs of the five coins found in the Quarters Proof Sets, PLUS proof versions of the penny, nickel, dime, half-dollar, and the five dollars. This year the core annual 14-coin set offered major competition as it was released in January, which was well before the 2011 Quarters Proof Set. Last year the core set offered less competition as it was issued in late July, which was well after the 2010 Quarters Proof Set.

The sets are considered a collector product because of the proof qualities of the coins, the special care and treatment each receives, and the fact that each features a "S" mintmark showcasing their production in San Francisco. Regular quarters produced by the United States Mint for circulation lack the proof or mirror-like finish and are made in Denver or Philadelphia.