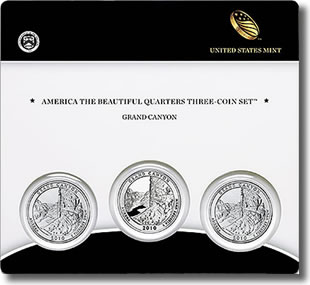 The set contains one clad proof quarter minted at the US Mint facility in San Francisco and two clad uncirculated quarters — one from Philadelphia and the other from Denver. Each collector strike bears their corresponding mintmark. The sets make it easier for collectors to obtain unblemished numismatic versions of each Grand Canyon National Park Quarter without purchasing more expensive annual sets.

The quarters in the three-coin set are each enclosed in clear plastic coin holders and are neatly held together on a durable plastic card, as shown in the US Mint image of above. A brief description of the site and the coin is written on the back of the card with the Certificate of Authenticity.

The Grand Canyon Quarter was the fourth release in the America the Beautiful Quarters Program, and this three-coin set also marks the fourth of its kind. The US Mint has been slower at releasing the sets corresponding to later circulating strikes from last year, as the quarter was released into circulation last year in September.

Collectors interested in Grand Canyon’s Three-Quarter Set can place their orders online at http://www.usmint.gov/catalog or by phone at 1-800-USA-MINT (872-6468). The standard $4.95 shipping and handling fee will apply to all domestic orders.

The Grand Canyon National Park Quarter honors one of the best known parks in the world. The coin’s reverse or tails side portrays the canyon’s northernmost section where ancient granaries can be seen above the Nankoweap Delta in Marble Canyon near the Colorado River. Inscriptions include GRAND CANYON, ARIZONA, 2010 and E PLURIBUS UNUM.

The obverse or heads side features the familiar 1932 portrait of President George Washington by John Flanagan. The mint restored the image to bring out subtle details and beauty of Flanagan’s original model. Obverse inscriptions are UNITED STATES OF AMERICA, LIBERTY,IN GOD WE TRUST and QUARTER DOLLAR.

Those who wish to own future three-coin sets in the new quarter series may sign up for the Mint’s easy Online Subscription Program. Much like a magazine subscription, each new set is delivered as it is released and automatically charged via a credit card. No previous releases will be included as part of a subscription. More information on subscriptions can be found on the Mint’s website.