The United States Mint’s Mount Hood National Forest Quarter Three-Coin Set was released today, May 4, 2011 for a price of $14.95, plus shipping and handling. Numismatists and park enthusiasts can order the set online at www.usmint.gov/catalog and by phone at 1-800-USA-MINT (872-6468). 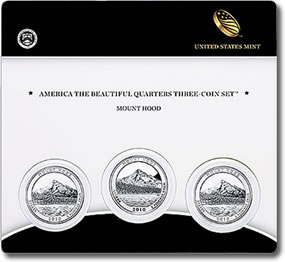 The sets are useful to collectors since they provide two uncirculated quality coins from the United States Mint facilities at Philadelphia and Denver and one proof quality quarter from the United States Mint at San Francisco, making it unnecessary to break-up a larger more expensive set containing the same coins. The three-coin set also makes handy souvenirs for visitors of the site being honored.

The three Mount Hood Quarters are mounted on a durable plastic card which has a brief description of the forest and the coin’s design. The Certificate of Authenticity is also part of the package.

Mount Hood National Forest Quarters were released into public circulation on November 15, and offered in bags and rolls by the United States Mint on the same day. They are part of several larger sets that were made available last year from the US Mint, including the:

Products from the United States Mint that included other coin denominations along with the Mount Hood Quarter were the 2010 Proof Set and the 2010 Mint Set.

On the reverse of the Mount Hood quarter, a classic image of Mount Hood is in the background with Lost Lake in the foreground. The design was created and sculpted by Phebe Hemphill. Inscriptions include MOUNT HOOD, OREGON, 2010 and E PLURIBUS UNUM.

The obverse contains a familiar portrait of George Washington by John Flanagan, which has been restored to better match Flanagan’s original model. It will be included on all quarters in the America the Beautiful Program. President Washington has graced the obverse of the quarter-dollar since 1932. Inscriptions include UNITED STATES OF AMERICA, LIBERTY, IN GOD WE TRUST and QUARTER DOLLAR.