The third coin issued under the America the Beautiful Quarters™ Program was the 2010 Yosemite National Park Quarter from California. 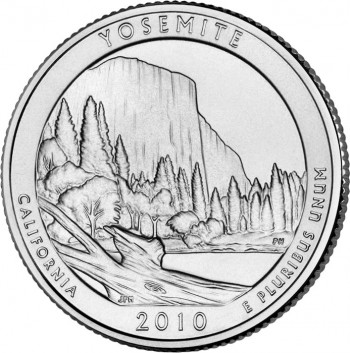 The quarter was introduced into circulation through Federal Reserve banks on July 26, 2010. The United States Mint and National Park Service hosted the coin’s ceremonial release at the park itself three days later, on July 29, 2010.

While most visitors only see the majestic Yosemite Valley, the national park actually encompasses nearly three quarters of a million acres. Most of this land has been set aside as designated wilderness. And with all that beauty of Yosemite, there were plenty of design opportunities for the third 2010 quarter-dollar.

The final reverse design for the Yosemite National Park Quarter was selected by U.S. Treasury Secretary Timothy Geithner and then announced by the U.S. Mint on March 24, 2010. As shown in the above coin image, the design features the historic El Capitan, which rises more than 3,000 feet (910 meters) above the Yosemite Valley floor and is the largest monolith of granite in the world. It was designed by Joseph Menna and sculpted by Phebe Hemphill.

Prior to the selection, there were four Yosemite quarter design candidates created in line art form and then reviewed by several organizations and people. The two groups charged with making design recommendations for all American coinage, the United States Commission of Fine Arts and the Citizens Coinage Advisory Committee, released their opinions of the four proposals. Each selected a different granite feature of Yosemite Valley. The images of the quarter candidates and comments from the CCAC and CFA follow.

The Commission of Fine Arts chose design candidate CA-04 which featured the Half Dome rock formation, but commented that the "artwork appeared unfinished and should be further developed."

A view of El Capitan (CA-03) was chosen by the Citizens Coinage Advisory Committee with members attributing the designs simplicity as a major factor. It was this design that was eventually selected as the template for the creation of the 2010 Yosemite National Park Quarter.

Millions of years of nature at work is responsible for the scenery of Yosemite National Park. Not wanting this to be spoiled by the intrusion of man, President Abraham Lincoln signed the Yosemite Grant in 1864.

This legislation, while filled with good intentions, did little to protect the area at first. Left under the control of the state of California, enterprising individuals were quick to exploit the visitors who came to see the scenery and a dam was even constructed in the Hetch Hetchy Valley area to provide water for San Francisco.

With the persistent pleadings of naturalist John Muir, President Theodore Roosevelt signed legislation bringing control of the area under the federal government. Since then, Yosemite has become a haven of wildlife and a destination for an estimated 3.5 million visitors annually.