The 2011 Vicksburg National Military Park Quarter will be issued into circulation on approximately August 29, 2011. Honoring the military park located in Mississippi, the United States Mint will have an official release ceremony at the park within a few days of that that release. 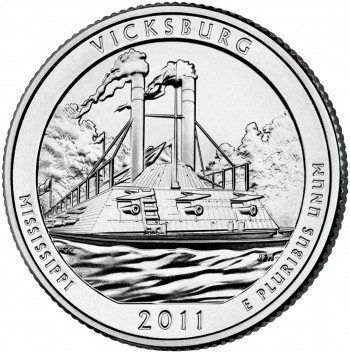 The Vicksburg National Military Park Quarter is the fourth 2011 strike to be released from the Mint under its America the Beautiful Quarters® Program – See Park Quarters Release Schedule for more information. The design for the coin was chosen by U.S. Treasury Secretary Timothy Geithner from four design candidates submitted by the US Mint. Geithner selected Design Candidate MS-02 which shows a depiction of the Civil War era gunboat USS Cairo as it would have appeared steaming on the Yazoo River. Surrounding the gunboat are the inscriptions of VICKSBURG, MISSISSIPPI, E PLURIBUS UNUM and 2011. The reverse was designed by AIP Master Designer Thomas Cleveland and sculpted by United States Mint Sculptor-Engraver Joseph Menna.

The final decision of which design to use was based on input provided to the Treasury Secretary from the Director of the US Mint, Ed Moy, as well as from the two bodies given the task of providing comment on possible designs for upcoming American coinage – the United States Commission of Fine Arts (CFA) and the Citizen’s Coinage Advisory Committee. The four design candidates submitted for evaluation are shown below:

When presented with the four design candidates for the Vicksburg National Military Park Quarter during their January 26, 2010 meeting, the CCAC selected Design Candidate MS-02, which was eventually chosen to be placed on the coin. In their comments, the CCAC stated that "Members felt that this design, in addition to the quality of its composition, has the virtue of showcasing the historical significance of the Navy in the Civil War."

The CCAC chose Design Candidate MS-04 for the Vicksburg National Military Park Quarter at their January 21, 2010 meeting "while recommending development of a simplified design that emphasizes this iconic feature without the attempt to depict a realistic landscape setting."

Vicksburg National Military Park was originally established on February 21, 1899 in the state of Mississippi as the fifth national military park under the control of the War Department of the United States. Ownership of the park was transferred to the U.S. Department of the Interior and the National Park Service on August 10, 1933.

Qualifying as the eighth oldest national park in the US, Vicksburg was created to commemorate the siege and defense of Vicksburg and today consists of over 1,800 acres. Included in those 1,800 acres are 1,325 historic monuments and markers, 20 miles of Civil War era trenches and earthworks, 144 cannon and even a restored gunboat known as the USS Cairo.

The park’s commemoration of the American Civil War Battle of Vicksburg also includes the greater Vicksburg Campaign which led up to it. Whereas the battle itself consisted of a 47-day siege that ran from May 18 to July 4, 1863, the campaign actually started in December of the previous year.

Today, Vicksburg receives an estimated 700,000 annual visitors, many of whom take the time to view the restored USS Cairo which is on display there.