The fourth coin under the America the Beautiful Quarters™ Program was released into circulation on September 20, 2010, with its ceremonial launch occurring on the following day. Arizona’s 2010 Grand Canyon National Park Quarter is emblematic of a park that draws almost 5 million visitors a year. 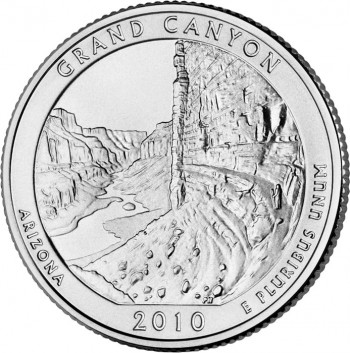 The reverse design for the Grand Canyon Quarter, as shown left, was selected by U.S. Treasury Secretary Timothy Geithner and then announced by the United States Mint on March 24, 2010. It features a scene of the granaries above the Nankoweap Delta in Marble Canyon near the Colorado River. Marble Canyon is the northernmost section of the Grand Canyon. Inscriptions on the coin include GRAND CANYON, ARIZONA, 2010 and E PLURIBUS UNUM. The reverse was both designed and sculpted by U.S. Mint Sculptor-Engraver Phebe Hemphill.

Prior to the final selection, several design proposal were created by the United States Mint and offered up for review. (See all four Grand Canyon National Park quarter design candidates below.)

As the Grand Canyon was also featured on the Arizona State Quarter (which was released in 2008), design candidate submissions for the America the Beautiful Quarters program had to looks for ways to be different. With this in mind, the two bodies given the duty to recommend a design for all US coins made their opinions known for the quarter-dollar.

In a departure from the recommendations they made for the first three coins of the series, both groups chose the same design for the Grand Canyon Quarter, one known as AZ-01. It is a canyon level view of the river as well as the canyon walls. It was this design that was selected by the Treasury Secretary and is seen on the released quarter.

The United States Commission of Fine Arts also liked the design but made a few recommendations including shifting the view slightly to the left to allow for a deeper perspective.

Cutting into the terrain for an estimated 5 million years, the Colorado River is given the honor of having created the vistas of the Grand Canyon. In addition, wind and rain have also played a part.

It was not until the mid 1850’s that the canyon came under any major interest, although it had been visited for thousands of years by Native Americans, of course. Then, in the course of a few decades, several expeditions were dispatched to the area, some of which were military in nature.

In 1869, Major John Wesley Powell led the first credible scientific exploration of the canyon when he took nine men and four boats down the Colorado River. Two years later he repeated the expedition, this time taking along a photographer.

It was not until 1906 that the area received any sort of federal protection when President Theodore Roosevelt declared it a Federal Game Preserve. Then in 1908 it became a National Monument, with the National Park status attained in 1919.

Today, most park visitors enjoy the view and facilities of the Park on the South Rim, which remains open year round. The North Rim is only open in the summer months due to the snows received in the area.