The United States Mint on Friday, April 1, will make available the 2011 America the Beautiful Quarters Silver Proof Set for $41.95. 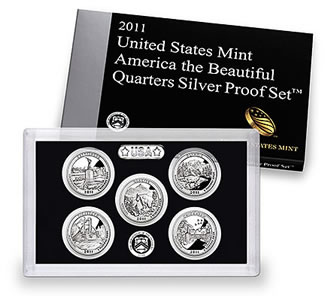 The sets contains 90% silver versions of this year’s National Park Quarters. These coins are struck in collector proof qualities and minted at the United States Mint facility in San Francisco. As such, each quarter bears an "S" mint mark.

The five 2011 quarters within the proof set include:

Combined, these coins contain just over 0.9 troy ounces of silver. The cost of the precious metal has jumped this year, which resulted in a recent price increases for several United States Mint silver products. The 2011 America the Beautiful Quarters Silver Proof Set was actually expected to go on sale $2 cheaper until the metal kept hitting new 31-year highs.

The United States Mint describes proof coins as having a "sharp relief and a mirror-like background" where their "frosted, sculpted foregrounds" give a "special cameo effect."

In describing the minting process, the Mint says "proof blanks are specially treated, polished and cleaned to ensure high quality strikes. The blanks are then fed into presses fitted with specially polished dies and struck at least twice to ensure sharp relief."

As of this set’s release, only one of the coins represented in it is available in general circulation — the Gettysburg National Military Park Quarter. It made its debut back on January 24. The next coin to find its way into circulation will be the Glacier Quarter with a release ceremony scheduled on April 13.

When available, the America the Beautiful Quarters Silver Proof Set may be ordered directly from the United States Mint website at http://www.usmint.gov/ or by calling its toll free telephone number 1-800-USA-MINT (872-6468).

The Mint indicates that there are no order limits in place and that the sets are expected to ship within 1-2 weeks. There is a $4.95 shipping and handling charge on domestic orders.

As a related United States Mint product, the same silver quarters may be found in the already released 2011 Silver Proof Set which has a price tag of $67.95. This set also includes the Roosevelt dime and Kennedy half-dollar struck in 90 percent silver, as well as clad proofs of the Lincoln cent, Jefferson nickel, the Native American $1 coin, and this year’s four Presidential $1 coins.