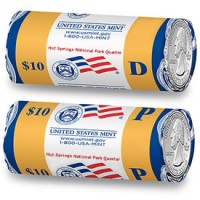 Hot Springs National Park Quarter rolls and and bags will be released on April 19, 2010, the United States Mint said on Monday.

Although not officially announced, the new coins will also likely be released into circulation on the same day.

Hot Springs National Park in Arkansas is the first to be celebrated in a new 11-year quarter-dollar series, named the America the Beautiful Quarters Program. The program honors National Parks and other National Sites in the US and its Territories at a rate of five per year.

As for the first offerings, Hot Springs National Park Two-Roll Quarter Sets includes 80 circulation strike quarters, with one roll containing 40 coins with the Philadelphia "P" mint mark and the other roll with the Denver "D" mint mark. The set is priced at $32.95.

100-coin Hot Springs National Park Quarter Bags contain circulation strikes of the quarters minted in Philadelphia or Denver. Each is priced at $35.95 price.

The two-roll sets are priced at the same level as last year’s quarter rolls while the 100-coin bags have increased in price by $3.

Upon release, orders may be placed directly on the United States Mint Web site at http://www.usmint.gov/, or through their toll free number 1-800-USA-MINT (872-6468).

As of this writing, the US Mint has yet to announce the final 2010 quarter designs. Candidate designs in line art form have been available to the public for months.