This week the United States Mint published mintages for the Great Smoky Mountains Quarter, the first of the five National Park Quarters for 2014. 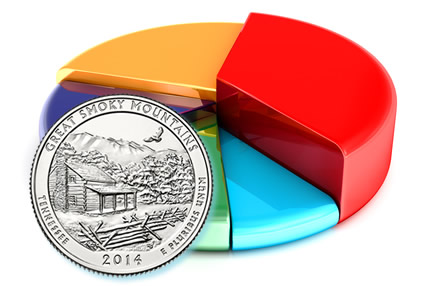 Collectors like to monitor how many coins are made with those that have fewer numbers generally more attractive for collections.

Quarters and other U.S. denominations for commerce are produced in circulating quality at two different facilities, the U.S. Mint in Philadelphia and the U.S. Mint in Denver. It is easy to discover where a quarter was made as it will have a corresponding "P" or "D" mint mark on its obverse or heads side.

Mintages for the Great Smoky Mountains National Park Quarter for Tennessee breakdown at 99.4 million from Denver and 73.2 million from Philadelphia for a combined total of 172.6 million.

These are by no means low figures, although they are very modest when compared to quarters made during the 50 States Quarters® Program. For example, the very first one in that series, the 1999 Connecticut State Quarter, had a combined mintage total of more than 1.3 billion.

The Great Smoky Mountains National Park Quarter, released into circulation on Jan. 27, 2014 and also sold in U.S. Mint rolls and bags on the same day, is the 21st issued in the America the Beautiful Quarters® series. Fourteen other quarters in the series have lower mintages.

Based on past years, there’s a good chance the Great Smoky Mountains Quarter will have the lowest mintages of the quarters issued this year, with the final one honoring Everglades National Park having the most.

There is a small possibility that the United States Mint could make more of the coins later this year. This National Parks Quarters page always has the very latest and updated mintages.