The US Mint published images of the reverse side of the uncirculated versions for each of the five National Parks that will be featured this year on U.S. quarters.

The uncirculated reverse images and descriptions are listed below. 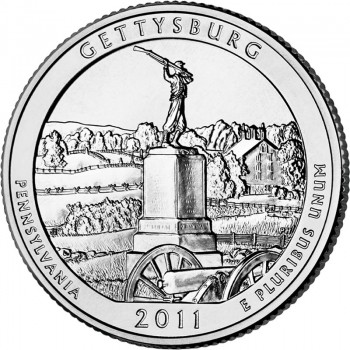 Nearly two million people visit Gettysburg National Military Park near Gettysburg, Pennsylvania each year. It is where the Battle of Gettysburg, one of the most famous and deadliest battles of the American Civil War, was fought and memorialized. The park is about 6,000 acres, including Soldiers’ National Cemetery where President Abraham Lincoln delivered the Gettysburg Address in 1863.

The image chosen for 2011’s first quarter-dollar shows the 72nd Pennsylvania Infantry Monument with a cannon in the foreground. It was designed by Joel Iskowitz and engraved by Phebe Hemphill. In the park, the featured monument is located on the battle line of the Union Army at Cemetery Ridge.

This quarter, launching on January 24, will be the first U.S. circulating quarter to honor an American Civil War Military Park. The Mint has struck commemorative silver coins before depicting a famous Civil War battle, such as the commemorative half dollar of 1937 of the Battle of Antietam. 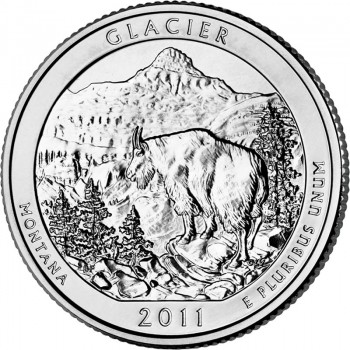 Considered one of America’s crown jewels, Glacier National Park is located near the northwest corner of Montana in the northern Rocky Mountains and stretches up to the Canadian border. Two million people travel to the park view its majestic peaks and glacial-carved terrain.

The quarter’s design depicts a mountain goat, a very commonly-seen animal of the park, with the northeast slope of Mount Reynolds in the distance. Barbara Fox designed the reverse, and Charles L. Vickers engraved it. It is scheduled to debut on April 4, 2011.

Tucked in the far northwest corner of the United States is Olympic National Park of Washington. With almost a million acres, the park takes up most of the peninsula and its shoreline. In 2009, more than three million visitors experienced the park’s stunning glacier-capped peaks, rain forests, and multiple ecosystems.

The scene showcased on the quarter to be releases June 13, 2011, is Mount Olympus in the background and a Roosevelt elk on the edge of a gravel river bar of the Hoh River. Designer Susan Gamble and Engraver Michael Gaudioso are credited for the picturesque design. 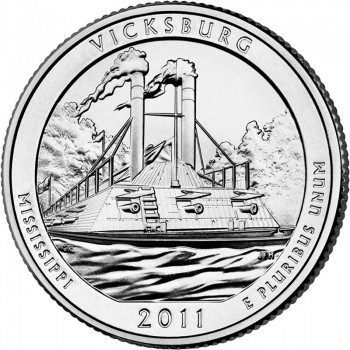 On August 29, the US Mint will release the fourth new quarter of 2011, featuring Vicksburg National Military Park located just outside the city of Vicksburg, Mississippi. Over 500,000 people per year drive the historic 16-mile tour through the hallow grounds of the park that mark the battle lines of the Union’s successful siege over the Confederate soldiers. It was a long and pivotal battle during the American Civil War.

The view on Vicksburg’s quarter features the U.S.S. Cairo, a Union gunboat, on the Yazoo River as it would have appeared during wartime. The image was designed by Thomas Cleveland and engraved by Joseph Menna. 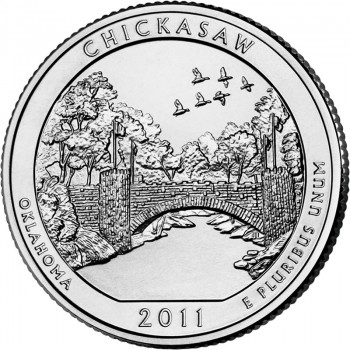 The serene landscape of the Chickasaw National Recreation Area located south of Sulphur, Oklahoma and surrounding Lake of the Arbuckles in south-central part of the state fills the eyes of over one million annual visitors. The peacefulness of its shady landscape and thermal properties of its mineral springs attract all ages to the area.

Those waiting for the launch of the coin will have to hold out until December 20, 2011. The design on the reverse side of the quarter depicts the scenic limestone Lincoln Bridge as birds fly above the trees in the background. Donna Weaver, designer, and Jim Licaretz, engraver, are responsible for the tranquil image. The bridge, built in 1909, is tucked away on the southern edge of the Flower Park area and has been a favorite scenic spot since its construction.

The obverse side of each quarter remains the same, featuring George Washington’s portrait.

All dates are subject to change by the U.S. Mint. These coins represent the sixth through tenth editions in the United States Mint’s America the Beautiful series of quarters. The series began in 2010 and is set to run through 2021, with five new designs each year that showcase a significant National Park or Site located throughout the United States and its territories.

The US Mint will begin accepting orders for bags and rolls of the coins around the time of their release, which may be ordered by phone via 1-800-USA-MINT (872-6468) or through its website at http://catalog.usmint.gov. Other products including the 2011 National Park Quarters will be released specifically for collectors throughout the year.