The United States Mint today launched their 2010 America the Beautiful Quarters Proof Set. It is the first numismatic product released to includes all of this year’s quarter-dollars. 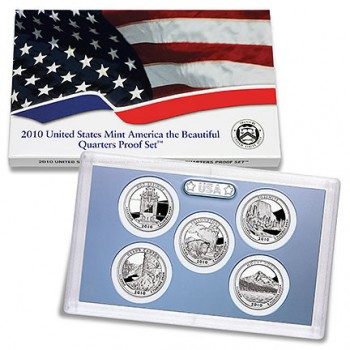 Collectors, or anyone else for that matter, can purchase a set for $14.95. Included within are the following coins that spotlight four national parks and one national forest:

The parks and forest are respectively located in the states of Arkansas, Wyoming, California, Arizona and Oregon.

The 2010 America the Beautiful Quarters Proof Set has coins with the same composition as the circulating quarters, 8.33% nickel and 91.67% copper. The coins in the set, however, are made with special proof blanks and undergo a unique minting process that gives them sharp detail and creates a mirror-like proof finish.

Each are produced at the San Francisco Mint and bear the "S" mint mark. All are placed in protective lens and inserted into specially designed sleeves. A Certificate of Authenticity signed by United States Mint Director Ed Moy is also included.

As a side note, only the Hot Springs National Park Quarter has been released into circulation as of this time. Collector proof and uncirculated coins coming out prior to their circulating versions is not uncommon.

Another Mint set with the America the Beautiful proof quarters will be the 14-coin 2010 Proof Set that will be released on July 22, 2010. It includes the same exact same quarters, plus proof versions of the four new 2010 Presidential $1 coins, a Native American Dollar, a Kennedy half-dollar, a Roosevelt dime, a Jefferson nickel and a Lincoln "Union Shield" cent. The 14-coin 2010 Proof Set is estimated to cost collectors around $31.95.

Additionally, on May 27, 2010, the Mint will issue the silver version quarters set, entitled the America the Beautiful Quarters Silver Proof Set. These coins are composed of 90% silver and 10% copper. With nearly an ounce of silver in total, they will be priced higher at $32.95.

Customers can purchase the 2010 America the Beautiful Quarters Proof Set directly from the Mint website or by calling its toll-free number at 1-800-USA-MINT (872-6468).

There are no order limits in place, and mintage levels are based on demand.